Time’s Up Hits a Home Run at Golden Globe Awards 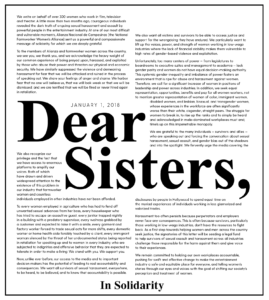 The Times Up movement charged into the spotlight at the Golden Globes on Sunday night, as actors and actresses spoke up in opposition to sexual harassment and abuse.

The movement was announced in a published a letter in The New York Times on New Year’s Day by more than 300 women who work in film, television and theater. Times Up kicks the #MeToo movement up a notch by promising to do something about the problem –  in Hollywood and in blue-collar workplaces nationwide.

One initiative was to have women wear black while walking the red carpet at the awards ceremony. The intent: to show solidarity with victims of sexual abuse. Nearly every woman heeded the call – which gave them the opportunity to explain why they wore black, and to talk about sexual harassment and assault while reaching millions of viewers. A number of stars also brought women’s activists with them onto the red carpet.

Oprah Winfrey, who received the coveted Cecil B. DeMille Award, addressed both racism and misogyny in her remarks. “For too long,” Winfrey continued, “women have not been heard or believed if they dare speak the truth to the power of those men. But their time is up. Their time is up.”

More to the point, Times Up has created the TIME’S UP Legal Defense Fund to connect female victims of sexual harassment with lawyers and subsidize their legal pursuits. The Fund is housed at and administered by the National Women’s Law Center. A network of lawyers and public relations professionals across the country will work with the Center’s Legal Network for Gender Equity to assist those who have experienced harassment or retaliation.

As the Times Up website puts it, “The clock has run out on sexual assault, harassment and inequality in the workplace. It’s time to do something about it.

“Join us. Add your name to our Letter of Solidarity by donating to the TIME’S UP Legal Defense Fund.”

As of Monday, Jan. 8, the fund had raised $16 million in 19 days through its Go Fund Me campaign.

Inspiration for the movement came in part from a letter of support and solidarity for Hollywood actors who have spoken out. The letter was written by the Alianza Nacional de Campesinas, an organization of 700,000 current and former farmworker women and women from farmworker families.

“Even though we work in very different environments,” the letter said, “we share a common experience of being preyed upon by individuals who have the power to hire, fire, blacklist, and otherwise threaten our economic, physical, and emotional security.”

Times Up has no leader. It’s run by volunteers and is made up of several working groups. One of those was instrumental in creating the Commission on Sexual Harassment and Advancing Equality in the Workplace, led by Anita Hill.

Another group, 50/50 by 2020, is dedicated to achieving gender parity in Hollywood boardrooms. It has already secured pledges from talent and literary agency ICM Partners, Creative Artists Agency, United Talent Agency and Vice Media.

Times Up is working on legislation to penalize companies that tolerate harassment and eliminate nondisclosure agreements that effectively silence victims of sexual harassment. There is also a group ensuring that minorities and gays, lesbians, bisexuals and transgender people are heard.

It remains to be seen whether Times Up can bring about lasting change. But it certainly made itself felt at the Golden Globes. Are the Academy Awards next on the agenda?