Tattoos and Piercings in the Workplace

As an employer, you’re no doubt aware that job applicants with tattoos and body piercings have proliferated in recent years, particularly as millennials – those born in the 1980s – take their place in the workforce.

A 2010 survey by the Pew Research Center reported that as many as 40 percent of millennials have one or more tattoos. A more recent 2012 Harris Poll of more than 2000 adults reported that one in five adults has a tattoo, and that 38 percent of individuals from 30 to 39 have at least one tattoo.

So how do you, as an employer, deal with this trend? The good news is that employers have the right to impose “appearance policies” on employees. That includes policies on body modifications such as piercings and tattoos, as long as they are enforced in a non-discriminatory fashion.

Negative perceptions about tattoos and piercings are still common. York College of Pennsylvania’s Center for Professional Excellence conducts an annual nationwide study on the state of professionalism in the workplace. As recently as the 2013 report, 74.3 percent of respondents said they were likely to turn away job candidates with facial piercings, and 60.6 percent would turn away applicants with visible tattoos.

Some employers require employees to cover their tattoos and remove their piercings while at work – and courts have upheld employers’ right to do so. A company can also choose not to hire someone because of the job applicant’s tattoos or piercings. Once an individual is hired, though, tattoos can’t be used as an excuse to fire him or her.

The rules are easing as workplaces become more tolerant. Employers in certain fields – creative fields such as music, painting, writing and acting, as well as athletic, design and culinary professions – accept or even welcome employees’ body art. Others will accept tattoos and piercings to a degree. 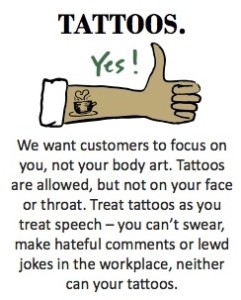 Starbucks, for example, allows tats as long as they aren’t on the face or throat, and as long as they’re not offensive. Small nose studs or ear gauges are allowed, but no other visible piercings. On the other hand, Ford Motor Co.’s liberal policy allows everyone from senior executives on down to display tattoos and piercings – although factory workers are cautioned about piercings that could affect their safety. Walmart allows inoffensive tattoos (offensive tattoos have to be covered), but no facial piercings.

If you don’t have an appearance policy, adopt one and distribute it to all employees. Make sure it has a justifiable business rationale and does not discriminate against particular groups in protected categories (i.e. gender, race, national origin, religion). Be clear about what is appropriate and permissible at your particular company, and what isn’t. And then apply your policy consistently.

If you need help drafting a policy or ensuring that it meets all legal requirements, contact Johnson Employment Law for guidance, 949-238-8044.