Following up on our recent blog about the Women’s March, I thought I would highlight one of my favorite feminists, Eleanor Roosevelt. She more than earned the title, “First Lady of the World,” bestowed upon her by President Harry Truman. 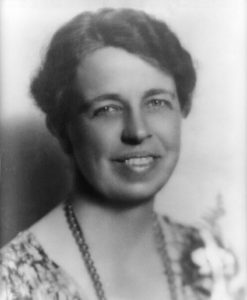 I am a graduate of Eleanor Roosevelt College at University of California, San Diego. I admire the former first lady for her efforts on behalf of women’s rights, human rights and social justice. The defining theme of the college is international understanding. Its motto is “developing world citizens through scholarship, leadership, and service.”

‘All human beings are born free and equal’

Eleanor fought for equal rights for women, African-Americans and Depression-era workers – and on behalf of human rights around the world. She was the leading architect of the United Nations Universal Declaration of Human Rights, which the United Nations adopted in 1948.

Its Article 1 declares: ”All human beings are born free and equal in dignity and rights. They are endowed with reason and conscience and should act toward one another in a spirit of brotherhood.”

The Women’s March on Washington expressed similar goals in its mission statement. That statement reads in part: “We will not rest until women have parity and equity at all levels of leadership in society. We work peacefully while recognizing there is no true peace without justice and equity for all.”

Eleanor would have joined the Women’s March

I believe Eleanor would have joined the marchers – men, women and children – who marched in Washington. She worked tirelessly for political, racial and social justice. Eleanor joined the League of Women Voters in 1920, the Woman’s Trade Union League in 1922, and the Women’s Division of the New York Democratic Party in 1923. She toiled with women’s groups around the nation to build their political base. Eleanor also worked with the National Consumer League to abolish child labor and establish a minimum wage law. Eleanor even founded her own nonprofit furniture factory, Val-Kill Industries, to create jobs for the poor.

As first lady, she campaigned to get executive-level appointments for women. She also held women-only press conferences at a time when women were generally barred from White House briefings, where she spoke out out on human rights, children’s causes and women’s issues. After Roosevelt’s death, she served as U.S. delegate to the United Nations under both President Harry S. Truman and President John F. Kennedy. She also chaired Kennedy’s Commission on the Status of Women.

As Eleanor put it: “The battle for the individual rights of women is one of long standing and none of us should countenance anything which undermines it.”