California is at the forefront when it comes to prohibiting transgender discrimination and promoting transgender equality – even as multiple states across the U.S. consider restricting access to restrooms, locker room and other facilities based on the user’s biological sex.

California has prohibited gender discrimination in housing and employment since 2004. That includes protecting an employee’s right to use the bathroom that corresponds with his or her gender identity, and prohibiting employers from forcing employee to wear a uniform that does not conform to their gender identity. 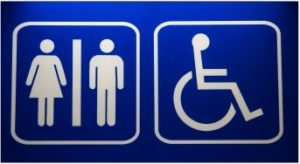 In 2013, Gov. Jerry Brown signed the first law in the nation calling on school districts to allow transgender youth to use bathrooms and participate on sports teams with the gender they identify with.

President Barack Obama tried to follow suit in August this year, when the administration attempted to institute a policy allowing transgender students to use the bathroom of their choice. In response, U.S. District Court Judge Reed O’Connor of the Northern District of Texas issued a nationwide injunction blocking the Obama administration’s bathroom guidelines.

Meanwhile, The U.S. Department of Justice Civil Rights Division filed a lawsuit against North Carolina’s HB2, which requires transgender people to use public restrooms that correspond with the sex on their birth certificate, not their gender identity. The backlash may have cost Gov. Pat McCrory, who signed the legislation, his re-election bid. He lost to Roy Cooper, who as attorney general said he would not defend HB2 in court. The bill is likely to be repealed once Cooper takes office.

Brown took his efforts even further this year by signing a bill requiring all single-stall toilets in California to be designated as gender neutral, and to be identified as such. That law takes effect March 1, 2017 and applies to business establishments, government buildings, and public accommodations.

Federal courts, the U.S. Department of Justice, and the U.S. Equal Employment Opportunity Commission (EEOC) all have concluded that discrimination because a person is transgender or gender non-conforming constitutes sex discrimination.

California employers should be sure their antidiscrimination and harassment policies expressly include “gender,” “gender identity,” and “gender expression” in the list of protected categories. Consider updating dress code policies, as well, to make them gender neutral.