First of a two-part series on office parties. The first part will focus on employers, the second on employees. 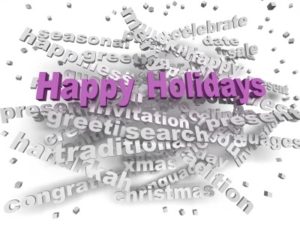 Holiday office parties can be fun, but employees and employers alike should beware of potential pitfalls that can ruin the festive atmosphere.

Employers are liable if employees drink too much and cause an accident or injury. However, there are several ways to control consumption and minimize the danger.

Be aware, too, that employees injured during a holiday party may be eligible for workers’ compensation benefits.

Although you probably won’t face a lawsuit for it, unless all of your employees (and spouses, if you invite them) are Christian, you might not want to call it a “Christmas Party.” Also provide food choices for alternative dietary requirements, such as vegetarians and those who don’t eat pork or shrimp for religious reasons. You don’t want to risk a discrimination claim.

If you do invite spouses, don’t assume all of them are of the opposite sex. And don’t forget to invite staff who are absent because of illness, injury or family-related leave. They may not receive internal emails.

Make attendance at the party voluntary. If attendance is mandatory, you must pay employees for their time. What’s more, if attending the party brings non-exempt employees past their 40-hour work week, you’ll have to pay overtime. Of course, if the party is held during normal work hours, the employees get paid anyway.

Choose a business appropriate location for the event. It’s likely not everyone will feel comfortable at Hooter’s. The facility should also be accessible to those with a disability.

In the days leading up to the party, provide written guidance to staff about acceptable standards of behavior. Caution employees that the holiday party is an extension of the workplace, and that you expect certain standards of them.

Remind them of your non-harassment policy, including prohibitions against inappropriate touching, sexist or racist remarks. That includes comments or jokes about sexual orientation, disability, age or religion. In addition, any entertainment you hire or music you play should eschew racist or sexist jokes. You could be liable for harassment claims for failure to protect employees from unwanted conduct. According to The Insurance Journal, sexual harassment claims spike in January. It’s also a good idea to jettison the mistletoe.

Note that disciplinary action may be taken for unacceptable behavior – but don’t take such action at the party. You may have to send the offender home, but mete out any disciplinary actions in private, back at the office. Also advise employees regarding the dress code. Nothing too revealing – and appropriate to the location the party is being held.

Be cautious in conversation

Caution managers not to talk about performance, promotion, salary or career prospects – comments that could bite them back. In a case in Britain, an employee sued his employer, claiming that his boss failed to honor a promise made during a holiday party that his pay would double over the next two years. The employee lost the case — but the incident cost the employer time and money.

With a few precautions, your holiday party should run smoothly, and a  good time will be had by all.